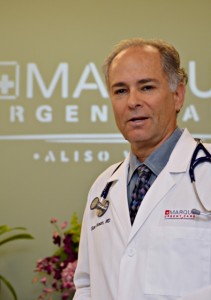 The Environment and Our Health by Stan Wasbin, M.D.

Our environment can be interesting and sometimes scary to say the least.  The world around us — the visible and the invisible, the living and the non-living– is teaming with threats to our well-being.  This sentiment crystallized in my mind the other day when, while carrying a stepladder, I reached to unlatch the gate to my backyard.  To my horror, I suddenly saw something move on the ground and simultaneously heard the unmistakable menacing rattle produced by the four-foot serpent I nearly stepped on.

At least a rattlesnake extends the courtesy of sounding its rattle before striking.  Other dangers to our health sound no alarm. For instance, a silent microscopic parasite transmitted by mosquito bites annually infects more than a thousand Americans, usually international travelers who failed to take preventive measures.  The resulting infection, malaria, remains a far greater problem outside the United States, where it kills approximately 1 million people — every year!

Although malaria and other devastating infectious diseases like smallpox and yellow fever once ravaged Colonial America, today most of the threats from our environment are far less lethal.  Nevertheless, those of us fortunate enough to live near, and to enjoy, Southern California’s beautiful beaches, ought not delude ourselves into believing that we are safe from environmental threats.  Here, too, our well-being can be assaulted by sunburn, stingray and jellyfish stings, riptides, and bone-crushing waves.  Dangerous enough?

Head for the hills, but you will then trade one set of threats for another.  Coyotes and mountain lions threaten to ruin your day — if not your life.  Go higher, and you still risk tangling with bears and incurring mountain sickness.

But, why view this all negatively?  The rattlesnake did not bite me.  It was more interested in placing distance between me and itself.  Had it sunk its fangs into my flesh, modern medicine stands between envenomation and demise.  Anti-venom therapy can be lifesaving.  Nature can be capricious and cruel, but doctors today stand on the shoulders of giants, and now can treat, cure, and prevent an enormous range of illness and injuries.

Make sure you are current on all immunizations.  Take sensible precautions, such as anti-malaria pills if you travel to a part of the world where mosquitos harbor the offending microorganism.  Mitigate but accept the risks that Mother Nature poses, and do not overlook the beauty offered by the great indoors.