A cough is caused by a variety of conditions or diseases that range from the simplest condition, the common cold, to more serious conditions of lung disease and medications. Because of the extensiveness of the discussions on this topic, this topic on cough will be divided into 3 inter-related articles. This is part one. Part two and three will be presented over the next few months.

One of the most common symptoms patients present with to the doctor is a cough. What brings these individuals to medical attention is the severity or persistence of the cough.  Patients usually describe the cough as debilitating, keeping them up all-night, and occasionally causing them to vomit. The cough can be dry and hacking or productive with mucous/phlegm. The color of the mucous/phlegm is described as clear, yellow, green, blood tinged, or even rusty.  In the case of whooping cough, the phlegm has been described as psychedelic by some patients.  There can be other symptoms associated with the cough such as fatigue, chest tightness, shortness of breath, or wheezing. Based on the basic presentation and associated symptoms, the physician develops a mental list of the causative factors for the cough. Let’s look at how physicians approach this condition.

The causes of cough have a wider complex of conditions for adults than for children. Where conditions have a commonality for both adults and children, no distinction will be drawn. Where age is a contributing factor for the cough, this distinction will be made. For the purpose of this article, I will be using the definition of the American College of Chest Physicians to separate children from adults. The American College 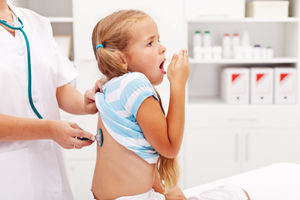 of Chest Physicians defines children as younger than 15 years, and adults as 15 years and older.

Physicians use the term Differential Diagnosis (DDX) to link various conditions/illness that clinically present with common, or similar symptoms. Once this mental list is made, they take additional medical history, may order additional test or X-rays to make the definitive diagnosis and exclude other diagnoses. For cough, the DDX is extensive and includes but is not limited to the following: Post Nasal Drip, Common Cold, Smoking, Reflux, Bronchial Infection, Asthma, Environmental Allergens, Lung Disease, Medications, Obstructed Airways and Whooping Cough.

For many individuals the most common cause for a cough are seasonal allergies or allergic rhinitis secondary to pollens, dander, ragweed etc. The cough is a natural reflex of the body to foreign material in the respiratory tree/system that narrows the nasal passages, upper airways, and the bronchial passages of the lungs. As I explain to patients, the respiratory system begins with the nose. When we inhale, we draw into the body miniscule foreign particles floating in the air into the respiratory system. This sets up a series of events that sets in motion the body’s defense mechanism. For most individuals, the immune system, the body’s defense mechanism, can destroy these “invaders” before they can take a foot hold in the respiratory system. When these “invaders overwhelm the system, nasal congestion with post nasal drip causes coughing.  The cough may or may not be productive of mucous or phlegm. When the individual lies down to sleep the coughing is worse secondary to the draining of blocked passages by gravity. The most common treatment for post nasal drip associated with allergic rhinitis are anti-histamines like Benadryl, Sudafed (behind the counter and is only dispensed by the pharmacist after showing proper identification), Claritin, Claritin-D, Allegra, Allegra-D, Zyrtec, Zyrtec-D, Nasacort, Flonase. There are other prescription medications that can be prescribed if the OTC meds are ineffective. You should discuss this with your physician.

The common cold is a viral infection and like seasonal allergies, it begins in the nasal passages causing irritation and producing secretions/mucous. The initial symptoms are similar to post-nasal drip but can extend into the sinuses and into the lungs. This condition can be short lived resolving in 5-7 days or can progress to a more serious condition such as bronchitis or pneumonia. Viruses are “organisms” that invade the body and reproduces within our body’s white blood cells. Our immune system, specifically the lymphocytes, creates “attack cells” that produce antibodies which “chew up and destroy these infected cells clearing the body of the infection. These “protective cells are reproduced by our bodies daily. Viruses live and reproduce in these cells and are therefore “hidden” from the effects of antibiotics which only treat infections in the blood-stream, i.e. bacterial infections.  Antibiotics are ineffective in treating viral infections. The best treatment is supportive. This includes drinking plenty of fluids, bedrest, and taking over the counter (OTC) medication e.g. acetaminophen, ibuprofen, for symptom relief and vitamins, particularly vitamin C which supports healing.

Reflux or Gastroesophageal Reflux Disease (GERD) is another cause of cough. In this condition the cough maybe associated with a burning sensation in the back of the throat or behind the sternum also known as the breast plate. The cough is worse when lying flat as stomach acid enters the distal esophagus and travels toward the upper esophagus. This irritation causes the cough reflex. Treatment is multi-modal consisting of sleeping with your head and upper chest elevated at an approximate 45-degree angle to keep the acid from traversing up the esophagus and medication i.e. proton pump inhibitors (PPIs) or H2 blockers. PPIs include the following medications: Aciphex, Protonix, Dexilant, Prevacid, Prilosec, and Nexium. H2 blockers include Tagamet, Pepcid, Axid, Zantac. Other recommendations include a bland diet, decreased alcohol intake, avoidance of spicy foods to name but a few.

Asthma is an episodic chronic inflammatory disease of the airways producing cough, wheezing, shortness of breath, chest tightness and fatigue. The severity ranges from mild to severe. Asthma is a disease of all age groups and accounts for over 14 million office-outpatient visits and over 500,000 hospitalizations per year. Childhood asthma will usually manifest before age ten. In childhood, there is a 2:1 male to female prevalence but by age 30 the distribution is roughly equal male to female. Physicians divide asthma into three distinct categories: heterogeneous disease, atopic (genetic) disease, and environmental conditions.  Acute asthma attacks present with a triad of symptoms: dyspnea or shortness of breath, cough, and wheezing. As symptoms progress chest tightness, rapid breathing, and wheezing with both inspiration and expiration become prominent.  Depending on the severity of presenting symptoms, treatment can be as minimal as using an inhaler like Ventolin, Albuterol, Proventil or ProAir. These are known as rescue inhalers as they reduce the airway restrictions and allow air to flow without blockage.  For individuals with more frequent attacks or with intrinsic-atopic asthma, your physician may also prescribe a steroid inhaler like Flovent, Advair, Qvar for daily use to decrease airway inflammation. If the individual’s symptoms are moderate to severe at presentation, the physician will usually implement immediate treatment consisting of nebulized bronchial dilator (usually Albuterol), a steroid injection to decrease inflammation, and an injection of antibiotics to treat infection. This is usually followed by placing the patient on oral steroids for 5-7 days, oral antibiotics and, of course, a rescue inhaler.  Acute asthmatic exacerbation is one condition that can cause sudden death from airway obstruction.

We will continue this fascinating discussion on cough in the next article in the series with environmental allergens, blocked airways, and whooping cough.